With the year fast drawing to a close it is time to review and round up all the current issues:

Conveyance of Patients in PTS Ambulances: Concerns have been raised with regard to the conveyance of patients in PTS ambulances which are not fitted with a stretcher. These vehicles have a capacity to convey two wheelchair patients in their own wheelchairs (secured in place by King Rip system) and a further two patients on fixed designated seating. The concern being raised was about carrying an additional patient on the rearwards facing (attendants) seat which has limited space between the additional patient and the wheelchair patient.

In addition to the limited space available for the extra patient, concerns were raised that the solo crew member would not be able to safely or effectively supervise all the patients due to the existence of the bulkhead separating the crew cab from the patient saloon area. It would not be possible for the solo crew member to ensure that the extra patient on the attendant’s seat did not turn ninety degrees and travel seated sideways to be more comfortable. The Construction and Use Regulations define designated seating as “fixed, facing forward (or rearwards) with a three-point (or four point) seatbelt to safely restrain the occupant.” The law also places the responsibility on the driver to safely convey their passengers, which in this situation they would not be able to do.

A14 Lane Restrictions: The A14 is undergoing extensive upgrade and part of the safeguarding in place for the road workers involves prohibiting the use of the right-hand lane by vehicles wider than 6 feet 6 inches. Given that our ambulances are much wider than this it has been confirmed by our Driver Training Unit (DTU) that “Emergency vehicles are exempt from the speed and width restrictions in place on the A14 while they are responding under emergency road conditions”.

Safety near, over or on water: The safety of crews who are dispatched to patients that are on boats, houseboats or properties along remote riverbanks has been raised regularly by Unison Health & Safety. Our concerns are based around crews having to leave the safety of solid car parks and carry their equipment along often dark, unlit river banks or canal towpaths which are invariably wet, slippery, uneven and which pose a realistic hazard of falling into deep fast flowing water.

Not all crews are familiar with the topography in the areas to which they are deployed and often find themselves a long distance from the ambulance / RRV while searching on foot for their patient. With this in mind, Unison Health & Safety has been campaigning for the reintroduction of life jackets to ambulances in areas where there is a genuine risk that staff could inadvertently fall into water as a result of slipping or tripping over. Unison does not want to see life jackets introduced in order that ambulance crews may feel inclined to jump into water in order to rescue a person from the water; we do however believe that where there is a risk that employees may by accident fall into deep water whilst making their way to & from a patient, that life jackets must be reinstated.

Maternity Policy: Unison Health & Safety has identified that the “risk assessment” contained within the Maternity Leave Policy is not of the same design or configuration as all other Risk Assessments within our Trust and as such we believe that it fails to provide the same level of Risk Assessment that all other situations benefit from. We have therefore notified the Trust and will be working with the Trust to rectify this matter.

Use of Blue Lights & Sirens: It has come to our attention that there is a difference of opinion between drivers on the subject of blue lights and sirens. The subject has been of much discussion over the years and instead of being “prescriptive” the Policies now take the viewpoint that drivers of ambulances are “Professional Emergency Response Drivers” and recognise that their driving skills combined with their clinical training enable the driver to make informed decisions in respect of using blue lights and sirens. With this in mind I have been able to meet with Andy Reid (Driving Standards Manager) and the emphasis now is “Permitted to use Blue lights and sirens”.

The following information, contained within the Driving Standards Policy, with regard to the use of blue lights and sirens is offered as “guidance” when dispatched to patients:

All emergency response trained staff are reminded that the claiming of legal exemptions whilst using visual and audible warnings is always the responsibility of the driver.

Non-driving Paramedics: Due to circumstances changing, the recent Paramedic graduates were not able to undergo their emergency driving courses before joining us full time. This matter has been reviewed and to ensure that they are gainfully employed and do not de-skill, it has been agreed that that they can be employed in the following roles:

Additionally, where local agreement has been reached, they can be crewed with a qualified driver as part of a two-person crew. However, the driver must be contacted before the shift to establish if they are prepared to drive for the shift duration. If this is agreed, then the driver is to notify EOC when they become tired and are then to be rested.

Winter clothing: The much-awaited winter jackets have arrived in the UK and consignments are already on the road to bases as I draft this message. Bearing in mind the anticipated drop in temperature that has been predicted, members of staff are encouraged to layer up their clothing. With this in mind it is worth repeating that long sleeved under clothing is permitted “when not physically attending to a patient” and that any additional civilian clothing worn under the uniform should be complimentary to the uniform colours and not conflicting. White, black, yellow or green was previously agreed as acceptable. Snoods are an acceptable addition but scarves were considered a hazard.

Life Changing Injuries: It has been noticed that feet are being rested on the dashboard and this places the person at risk of serious life changing injuries if the air bag activates. The practice should not be encouraged.

Designated Seating: Concerns have been raised that to increase the carrying capacity of PTS ambulances, the crew can utilise the stretcher to carry the additional patient. Following up the concerns it has been established that the Construction and Use Regulations define designated seating as “fixed, facing forward (or rearwards) with a three-point (or four point) seatbelt to safely restrain the occupant.” The manufacturer of our stretchers (Ferno) have stated that their stretchers are designed to safely convey patients who have medical conditions or needs that require them to be carried on a stretcher. They state that their stretchers should not be used to convey persons seated. This makes logical sense because anyone being conveyed on a stretcher must be positioned lengthways and secured on it by the 8 straps provided.

However, the instruction which was sent out to PTS staff included “ …if necessary, the attendant can give up their seat and travel seated on the stretcher” which is totally unacceptable and unprofessional because if the crew member was to travel on the stretcher, they too would be required to secure themselves onto the stretcher by the 8 straps and these would hinder them in supervising or responding to the needs of the patients being conveyed on the designated seats.

If an accident were to occur and the person being conveyed on the stretcher did not have a clinical need to be on it, but were to sustain serious, life threatening or fatal injuries, (which they would not have done if they had been conveyed on a designated seat), it would be down to the Coroner to decide if their outcome could have been prevented and whether being conveyed on the stretcher for a financial / operation reason as opposed to a clinical need, was acceptable or if it was unacceptable and unprofessional. We are waiting for a final resolution to be reached.

Tail lift Deployment: The safe deployment of tail lifts was covered in great length when they were first introduced and also when the style of tail lift safety rail was changed.  The area to the rear of the ambulance must be clear of obstructions before the tail lift is deployed and the operator must ensure that the tail lift is level before lowering it to the ground. The small lip at the end of the tail lift is designed to provide a smooth run-off for the stretcher but it is NOT designed or constructed to act as a wheel stop. Crews should ensure that they have control of the stretcher when it is on the tail lift and that at least one set of foot-operated wheel brakes are applied. When selecting up or down, operators must ensure that they select the correct switch to avoid incorrect deployment which may result in unexpected consequences. This is crucially important when the patient is being loaded or offloaded via the tail lift.

Exiting Ambulances: When exiting the ambulance either at the rear of via a side door, it is important to do so in the recommended manner which is with your body facing inwards. Where there are handrails provided it is recommended that you make full use of them to ensure that if you stumble, you are able to prevent yourself from falling away from the vehicle. When exiting ambulances in hours of darkness in areas which have poor or no street lighting, it is important to check the ground outside the door to ensure you are not stepping into a recess, gutter, hole, water or ice. 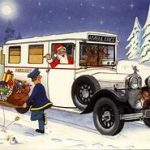 Festive Greetings to all our colleagues and a healthy 2019.

Concept Ambulance on The Move North East Ambulance Service
UNISON statement about the importance of members getting a break.

We use cookies on our website to ensure you find the information you need in the simplest way. By continuing to use our website you are consenting to their use. Find out more about cookies and how we use them.