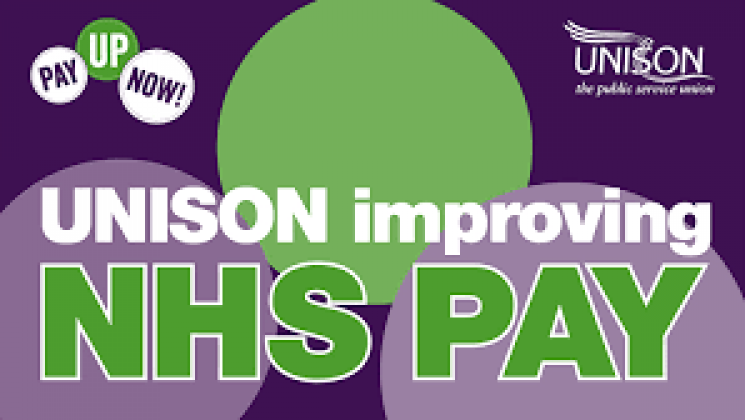 UNISON members working for the NHS in England have voted overwhelmingly to accept a three year pay deal and changes to the NHS pay structure negotiated by UNISON and the other 13 NHS unions.

All 14 NHS unions have been consulting their members on pay and have today (Friday) collectively endorsed this deal which has been overwhelmingly supported by NHS staff.

UNISON members voted yes by a large margin with approximately 84% voting to accept and 16% voting against. Over 83,500 members voted in a turnout of around 30%.

UNISON led the negotiations and the Treasury agreed to find £4.2bn of new money to ensure that these pay increases do not come at the cost of jobs or patient care.

Lead negotiator and UNISON head of health Sara Gorton said the agreement “won’t solve all the NHS’s problems overnight, but it will go a long way towards easing the financial strain suffered by health staff and their families over many years.

“The lifting of the damaging 1% cap on pay will come as a huge relief for all the employers who’ve struggled for so long to attract new recruits and hold onto experienced staff.

“But this three-year pay deal must not be a one off. Health workers will want to know that ministers are committed to decent wage rises across the NHS for the long term, and that this isn’t just a quick fix.

“Most importantly, the extra funding means the pay rise won’t be at the expense of services or patient care.

“Now the government has begun to put right the damage inflicted by its mean-spirited pay policies, staff will be hoping ministers announce an injection of cash for NHS services in time for its 70th birthday next month.”

Staff, including hospital porters, 999 call handlers, healthcare assistants, nurses, midwives and others, will see pay increases of 6.5% at the top of bands with more for those below – through a combination of cost of living pay rises and faster incremental increases – over the three-year period.

The deal will also give an immediate £2,000 increase to  lower-paid staff, taking them above the living wage.

Ms Gorton added: “We are meeting NHS employers at the end of June to formally agree the deal and will be working closely with them to ensure a speedy implementation so that members should see more money in their pay packets in July.”

Alan Lofthouse National Officer for the Ambulance sector has today emailed Ambulance Occupational Group members and branch contacts and confirmed the pay consultation results and that it will be discussed in more detail at AOG AGM at the end of June.

We use cookies on our website to ensure you find the information you need in the simplest way. By continuing to use our website you are consenting to their use. Find out more about cookies and how we use them.